Our agents are not available right now.
We'll get back to you soon. Thank you!

Will Bus-Mounted Cameras Save The City’s Failing Bus System? 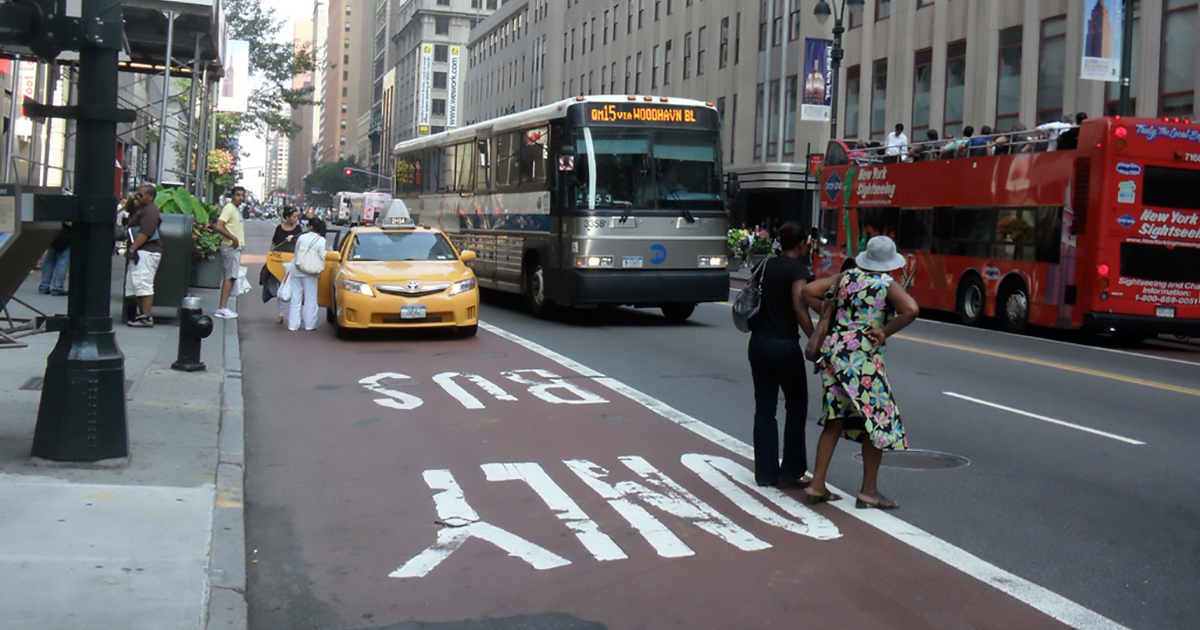 With over 2.5 million riders each day, New York City oversees the largest municipal bus fleet in the U.S. To keep New Yorkers moving, the city uses designated bus lanes to give buses priority in traffic and enable riders to commute to work, school, and other destinations in a reasonable amount of time. But with an average speed of 5.7 miles per hour, this system has failed its riders. And now the city could be looking to bus-mounted digital HD cameras to clear the lanes.

Introduced in 1963, NYC bus lanes are designated travel lanes for buses, their passengers, and emergency vehicles. Lanes are marked “Bus Only” and signs are posted along the routes with restricted time, days and specific regulations. The design intent was for buses to have a clear path through traffic congestion, giving riders a reliable and speedy trip. If a driver breaks the rules and drives, parks or stands in the bus lane for any impermissible reason during the time that the bus lane is in effect, the driver can be ticketed.

For the first few decades, NYPD took care of enforcement, patrolling the area and issuing both moving and parking violations to bus lane violators. Then in 2010, officials persuaded state legislators to sign off on the use of an automated camera enforcement system along bus routes across the city. Pole-mounted cameras were installed and set up to snap photos of vehicles (and their license plate) violating the restriction, by obstructing or driving through bus lanes. Fines of $115 to $150 are then issued and mailed to the registrant’s address. By 2014, according to the Independent Budget Office, 3⁄4 of the bus lane violations issued in NYC, were captured by these pole-mounted traffic enforcement cameras.

As the economy and population grew, congestion across the city thickened. Constant obstruction from parked vehicles had negated the benefits of bus lanes, slowing travel along the surface transit system to a snail’s pace and bringing ridership to an unprecedented low.

Then in April 2018, in the city where 54.5 percent of households do not own a car, a light appeared at the end of the tunnel for riders of the busiest bus system in the country.

New York City Transit President Andy Byford and his team at the MTA announced a complete citywide review and redesign of the bus network as part of their “bus action plan”. “We’ve listened to our riders’ concerns and are working tirelessly to create a world-class bus system that New Yorkers deserve,” Byford said, at the unveiling of his new plan.

A critical part of the plan is more protected bus lanes and strengthened enforcement. The installation of bus-mounted digital HD cameras on every city bus could vastly expand the opportunities for enforcement. Similar to school bus stop arm-mounted cameras currently being used in about a dozen states, the city bus-mounted cameras flash every time the driver opens the door. Violators caught parked or standing in the bus lane can face fines of $250 and up- so be careful!

One of the best ways to stay ahead of the curve and remain secure in the city that never sleeps is by using advances in technology to help take a bite out of crime. City surveillance plays an increasingly important role in deterring crime and ensuring the safety and security of citizens.

Paragon Security has been turning innovations in technology into secure realities for residents, offices, apartment managers, retail businesses, developers, hospitals, schools and city facilities throughout the five boroughs and beyond for more than 28 years. Stop in or give us a call at 212.203.0821 to discuss how we can help put technology to work for you.

We will call you now:

Paragon Security is New York's leading locksmith and security company. For more than 25 years, Paragon has offered locksmith and security services to customers all across New York City. We are proud to serve areas including Manhattan, Brooklyn, Staten island, Queens, The Bronx, and more. We offer 24/7 emergency locksmith services as well as security solutions including intercom installation and repair, security systems, keyless locks, alarm systems, security cameras and much more. To learn more about Paragon please contact us today.